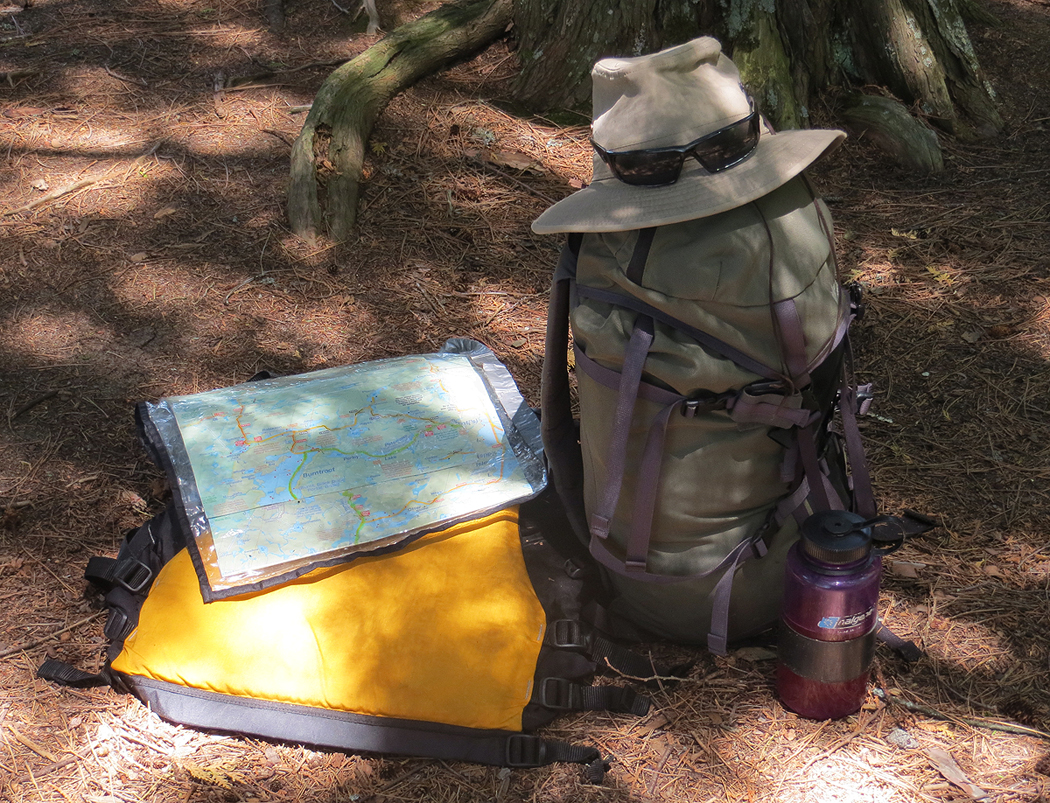 Algonquin Park has a history of logging, famous artists, vacation resorts, fishing and, of course,
canoeing. There is the history everyone knows, and then there is the history that not everyone knows.
One example is the Brent Run. I don’t remember the first time I heard about the Run, maybe
someone just mentioned it in passing, but when it came time for my yearly Father’s Day canoe trip, I
did some research into it.

What I found was this: The Brent run started due to rumours of a trip made by a couple guys that
paddled from Canoe Lake to Brent on Cedar Lake and back. I am sure some bragging how one
person is a better canoeist than another played a part in the next couple fellas making the run, but in
1934 a record was set for the first official Brent Run. The record was 32 hours. In 1948, a couple of
brothers decided it was their turn for glory and set out on the Run, setting a new record of 27 hours.
As records are meant top be broken, in 1990 two councillors from Camp Ahmek decided the 27 hour
record had stood long enough and they shattered it with a new record that still stands today; 23
hours.

The trip from Canoe Lake to Cedar Lake and back is a 162 km round trip, with 22 km of that being
portages. Since there is day and night paddling involved, you would need a decent idea of the lakes,
rivers and portages on the route. The rules are pretty simple, leave from Canoe Lake, paddle to the
Brent store on Cedar Lake, take a photo of yourself in front of the store, and then paddle back to
Canoe Lake. As well, you are supposed to do the Run in a cedar strip canoe, but as not everyone
has access to those these days, most do it with whatever they have.

And that was what I discovered about the Brent Run. Sounded pretty simple. Easy, maybe not. Tiring,
I am sure. An adventure, for sure. Break the record, worth a try.

Next obstacle to overcome would be finding someone foolish enough to follow me on this trip and as
it turned out, not as hard as I thought it would be. Fellow canoe tripper Mike Burns decided he would
like to give it a go and agreed to come along. Hearing that Mike and I were going to attempt the Run,
Markus Rubino and Scott Rogers decided to get in on the fun as well. So two canoes would head off
to see how close we could come to breaking the time of 23 hours.

We chose the end of June as that is when the longest day of the year happens, the water should be
at it’s highest to help us avoid rocks in the shallow rivers, there would be a full moon to help give light
at night, and not a lot of crowds so we would not be held up at portages and narrow creeks. Maps
were drawn up, the route was set, gear was gathered and the time and date were set.

We set up a base camp on Joe Lake, as there is no camping on Canoe Lake. The plan was for us to
paddle back to Camp Ahmek on Canoe Lake, and then backtrack past our camp on the way to Brent.
Finally, at 3:15 am on Friday June 17, 2016, under an almost full moon, the two canoes headed south
to the portage into Canoe Lake.

The run to Camp Ahmek and back to the island on Joe was quick and easy. As we continued on up
through the Joes, the sun began to rise and we knew we would make good time on the lakes as the
water was like glass and no wind to speak of at all. We made a beeline straight across Burnt Island
Lake, into the Otterslides, up through the twisty Otterslide Creek and onto Big Trout Lake. We were
right on schedule and making great time. Spirits were high after five hours of paddling. 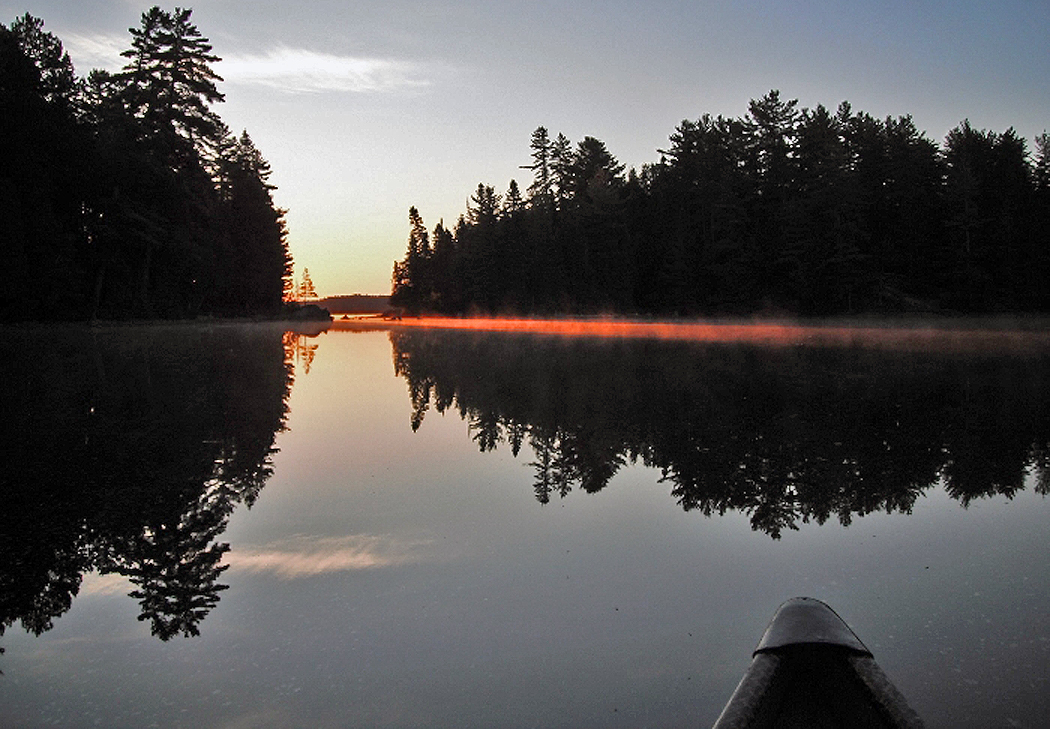 Sunlight Around The Corner

Half way up Big Trout Lake and the headwinds started. We were not happy about this, but we
paddled on, making it to the top of Big Trout, through Longer Lake and Red Pine Bay and up into
Burntroot Lake. At this point the heat was up above 30 degrees, the winds constant, and the bugs on
the portages were brutal, but I have seen worse. We found the heat and wind combined were taking
a toll on our energy and at 1:00 pm we made it to the top end of Burntroot and decided to call a rest.
Ten hours of paddling and two hours behind schedule. A record was not going to be broken by four
guys between the ages on 47 & 50. The light-hearted jokes of ‘whose stupid idea was this anyway’
started.

Twenty minutes after we stopped, filled up on granola bars and jerky, we were back in the canoes
and on our way. Now, however, it was different. We were not going for the record, now it was an
adventure shared by four long time paddling friends. Out to see if we could accomplish this Brent
Run. To see if we could beat the bugs, heat and wind and make it back to base camp. Now it was
more about the fun and camaraderie. 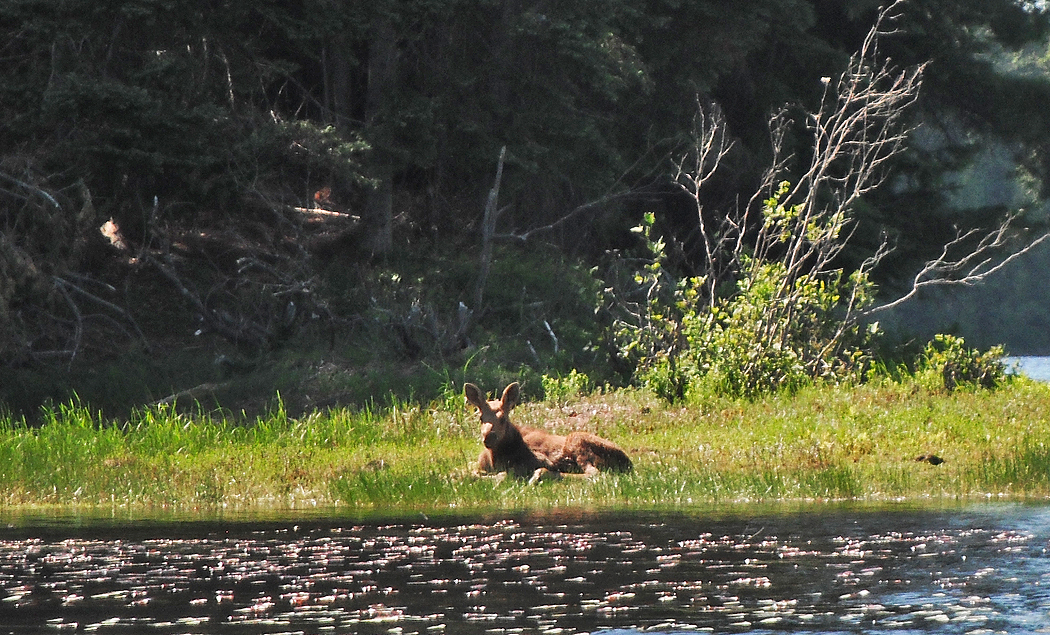 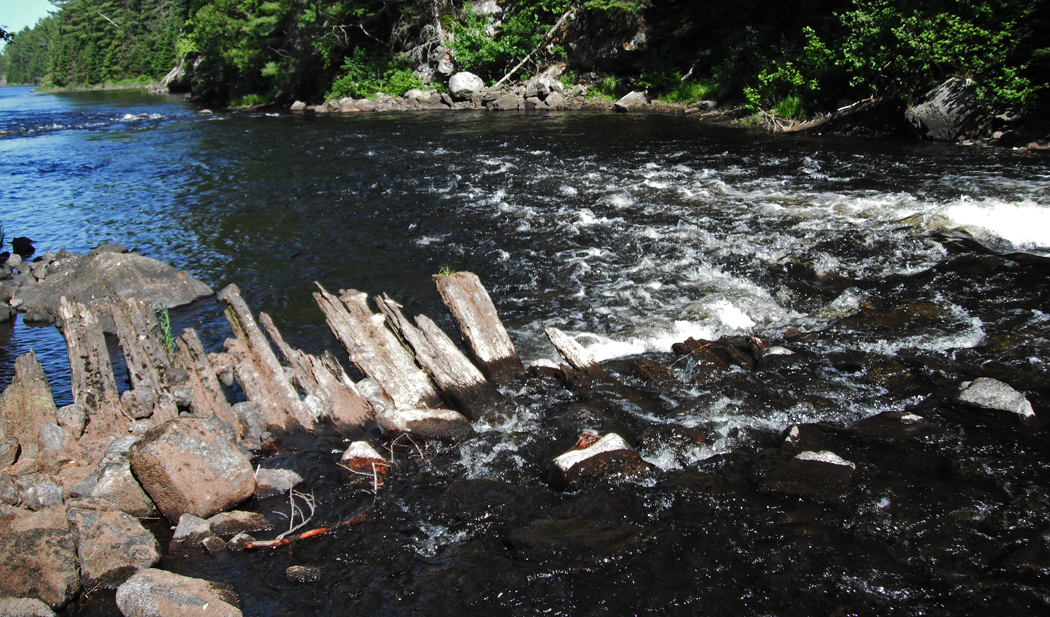 Up through Perley Lake, the Petawawa River, and Catfish Lake. Over the portage known as Unicorn
Hill which we had been dreading, and finally out onto Cedar Lake where Brent lay on the far shore.
This is when the paddling gods took pity on us, as there was a light breeze on Cedar, no strong
headwinds. We made it across the lake without any issues, beached the canoes and headed up to
the Brent Store to take the pictures before heading back to Joe Lake base camp. 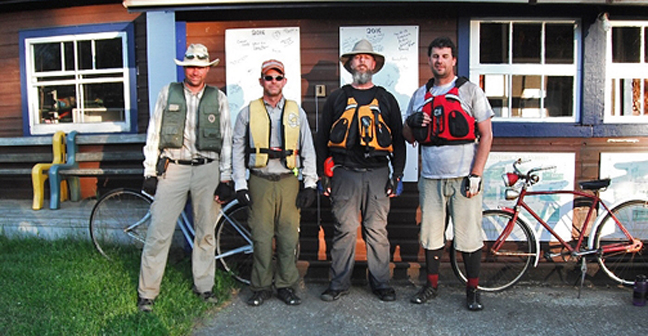 The Brent Store (The Halfway Mark!!!)

We talked with local legend Jake Pigeon at the store while we fuelled up with munchies and water.
He wished us luck and off we went, back the way we had come. Across Cedar, over Unicorn Hill,
Narrowbag and onto Catfish. The last couple portages we were losing steam and stumbling a bit in
the darkness as it was now just after 11 pm and we had been paddling for 20 hours. As we gathered
at the top of Catfish, we decided for safety reasons to head down the lake to Shangri-La Island and
grab some sleep. At midnight we were on the island, and with a fire going for some warmth, we slept
for a few hours before getting back on the water at 4:30am. We were all still in pretty good moods and
joking as the sun came up and we paddled on. Through the Petawawa River, through Perley and
onto Burntroot where once again we were met with headwinds. 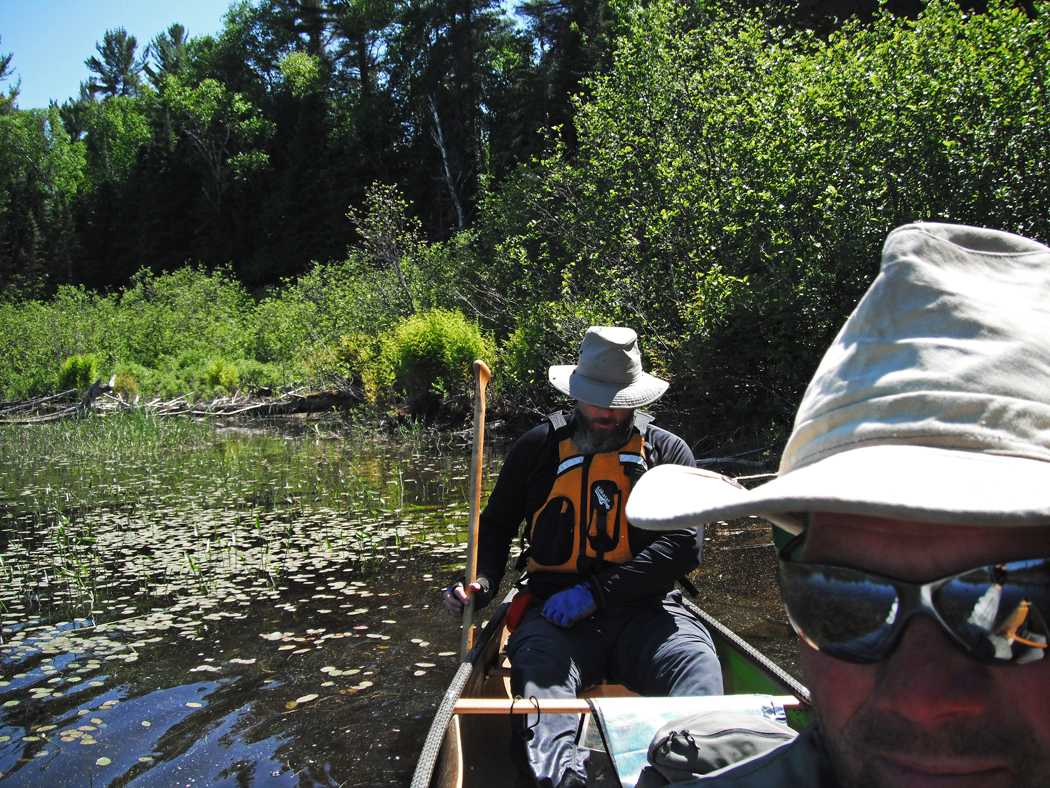 The wind and heat picked up as we continued paddling through Red Pine Bay and Longer Lake, and
by the time we made it to Big Trout, the wind was pushing one foot waves towards us. The rest of the
day would find us playing hide and seek with the wind behind points of land and islands as we made
our way south through Otterslide Creek, the Otterslide lakes, and the long paddle across Burnt Island.
By 6:30pm, we were hitting the portage out of Burnt Island and making our way into the final stretch
to base camp. Baby Joe and Little Joe were windy, but when we came out of the channel onto Joe
lake, the wind was the fiercest we had seen all day. We just put our heads down and dug our
paddles into the water. Just before 7:45pm on June 18, we beached our canoes at base camp. We
had completed the Brent Run in 40 hours.

We Did It!!! Tired and Ready For Food and Sleep

We did not beat the record, but we had an amazing time. The four of us shared an amazing
adventure that we will talk about for many years to come. We saw a lot of Algonquin Park, a lot of
wildlife, including moose, beaver, turtles, eagles and ospreys, and we all discovered what we could
accomplish if we put our minds to it. When we knew we were not going to break the record and the
heat and wind were wearing us out, we could have called it quits, but we did not. We continued on, and carried on a tradition that was started way back in 1934.

Thanks Mike, Markus & Scott for coming along. It was a blast!!!

As a side note, I learned that when Mike says lets just paddle over and see what the top of the rapids look like, he really means “I hope you are ready to run rapids because here we gooooooooooo!!!!!!”