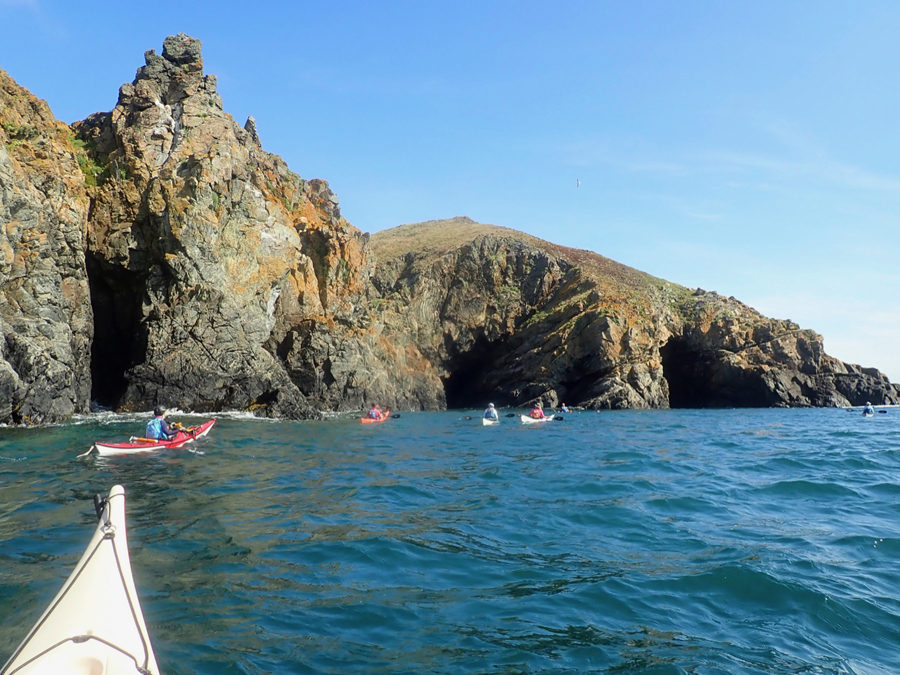 Mention the Channel Islands to most North American kayakers and their thoughts probably turn to an archipelago off the Californian coast, but what about the original Channel Islands? Located off the coast of northern France, they sit between the arms of Normandy and Brittany, a unique mixture of English and French.

Jersey, the largest, is my island home. Large is a relative term as it is only 9 miles long and 5 miles wide. Within this compact 45 square miles, there is some dramatic coastal scenery, set against a rich historical background, which stretches back approximately 240,000 years. The kayaking is made all the more interesting by the twice daily rise and fall of the tide, with a tidal range which reaches 12 metres on the larger springs.

The Jersey Canoe Club was formed in 1974, it was in the days when canoe was a generic term for anything that was paddled, today we paddle almost exclusively sea kayaks. Members of the Club have developed their skills and gained experience in local waters before moving further afield in search of paddling challenges. One area, which the members visit regularly is the west coast of Greenland, so regularly in fact that the Club has 8 sea kayaks based in Ilulissat, in the Disko Bay region of Greenland.

This summer, though, some of us, from the Canoe Club, looked at having some paddling adventures in our own backyard. No loading kit into North Face holdalls and struggling through international airports. It was a simple matter of driving 4 miles from home, unloading the kayak and heading out for 8 days. A pretty low carbon footprint.

Our first destination was Sark, just over 12 nautical miles to the north. Our departure was timed to coincide with the start of the northerly tidal streams. In the Channel Islands it’s a matter of working with the tides, otherwise failure and epics are the potential outcomes. A quick radio call to the Jersey Coastguard and soon we were heading north at 5 knots. We have a good working relationship with the local coastguard, always radioing a passage plan when we are heading offshore. It’s always reassuring to hear a friendly voice on Channel 82. 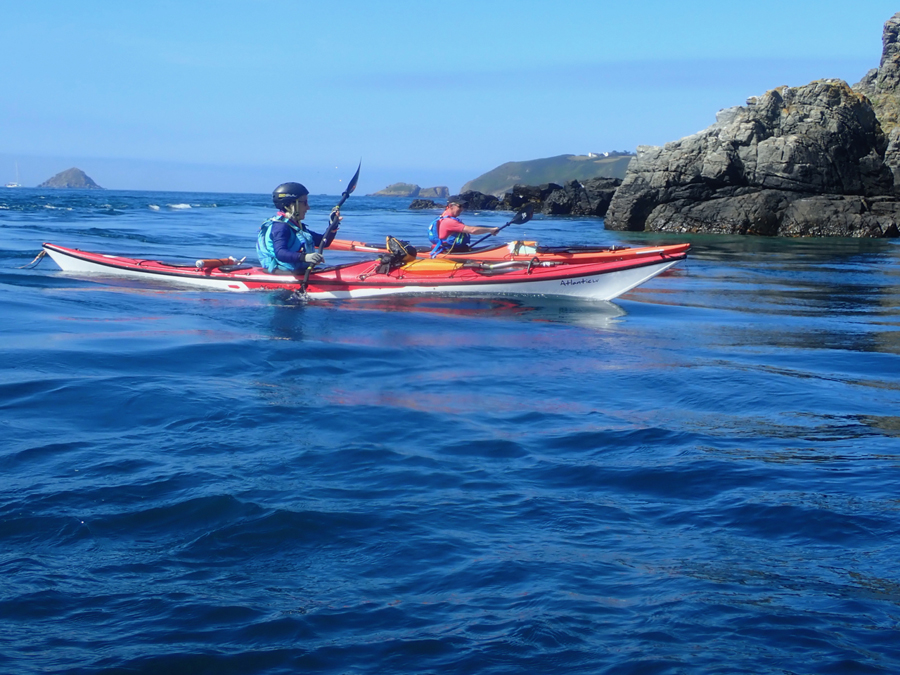 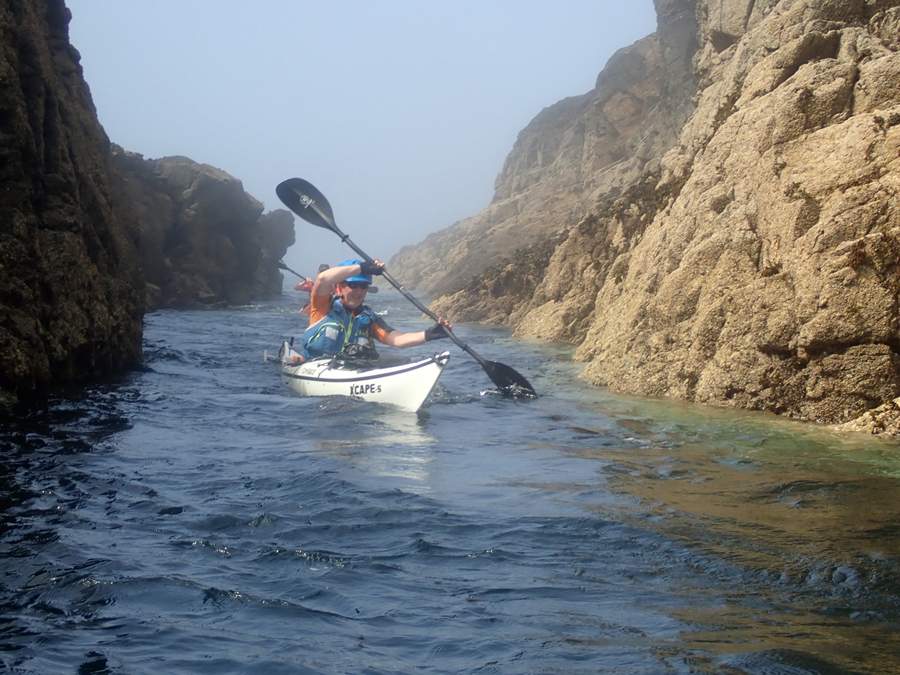 The crossing, to Sark, took 2 hours 50 minutes, in almost perfect conditions, and before lunch we were lifting the kayaks up the beach before heading to the campsite. Sark is a unique island, retaining many attributes of a feudal society. The island was settled in 1565, from Jersey, Elizabeth 1st gave permission for 40 families to settle there, in an attempt to discourage the French pirates. Each house had to be able to supply a man with a musket for the islands defence.

We walked up the hill to the campsite, no cars are allowed on the island, before setting out in search of a place to swim and a restaurant. The pattern for the week was paddle a few hours, put up a tent and eat out. It’s surprising how much room there is in a sea kayak when you don’t have to carry a week’s worth of food.

Sark was to be our home for two nights, as the following day we planned to paddle around the Island. Even exploring the bays, the total distance of a circumnavigation is only 8 nautical miles, but it actually took us 7 hours. There is just so much to see, endless caves, stacks and arches, including one long tunnel which has currents reaching speeds of 5 knots pouring through. Creux Harbour was the original sheltered landing, built in the 1860’s, where we stopped off for coffee and cake. With the unseasonable hot weather, being experienced we needed to refresh ourselves by swimming in the crystal-clear waters. We stopped at L’Eperquerie landing, one of the earliest anchorages on the island, where the mooring bollards for small boats, are re-cycled upside-down cannons. 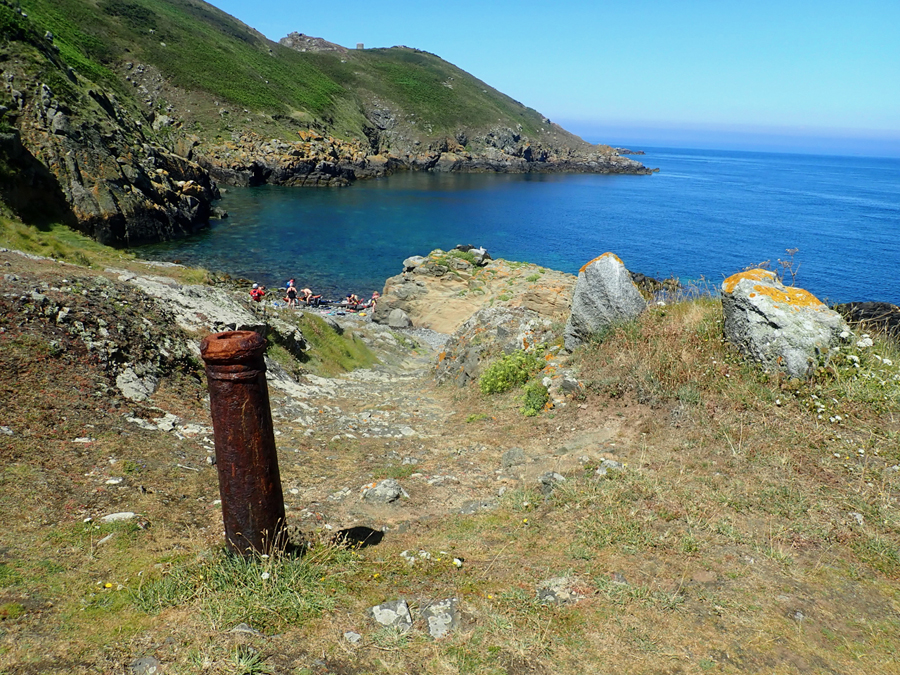 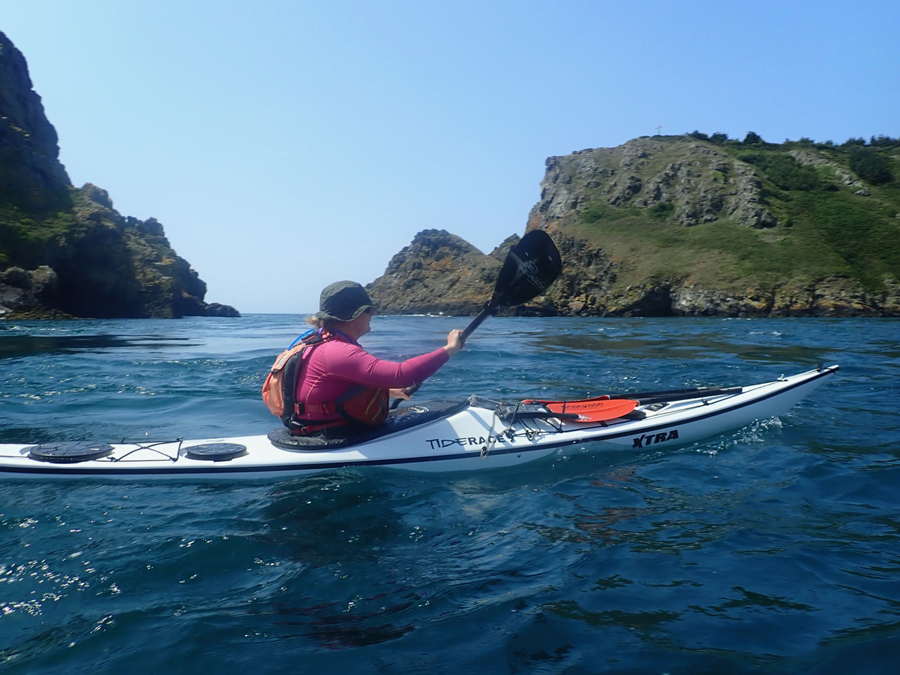 The west coast of Sark provided plenty of amusement and some challenges as thick fog obscured part of the route. The tidal streams were heading south as we threaded our way through the offshore reefs, great entertainment, and 7 hours after we left Dixcart Bay, we were lifting the kayaks back up the beach.

The following day we headed to Herm, a particularly small Channel Island, with a resident population of 60, swelled during the summer months by seasonal workers for the tourist industry. Only just over 3 nautical miles from Sark, timing was of the essence, as we had to cross tides running up to 4 knots at time. With correct planning the crossing was really easy and before long we were sitting on Shell Beach, on the north east coast of Herm, a beach reminiscent of the Caribbean as opposed to North West Europe.

Herm has a fascinating history and looks lovingly cared for by the people who live and work on the island. The campsite is close to the highest point on the island, offering superb views from not only where we had paddled but also our proposed route for the following morning. Our destination was Alderney, the most northerly and isolated of the Channel Islands. We were looking at a 22 nautical mile day, 17 of which were going to be an open crossing. 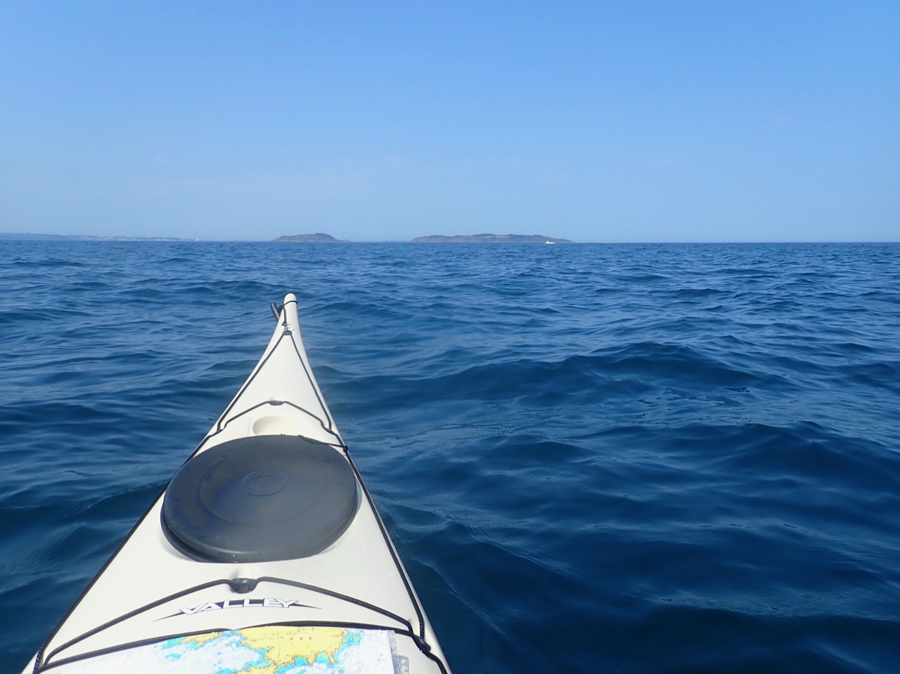 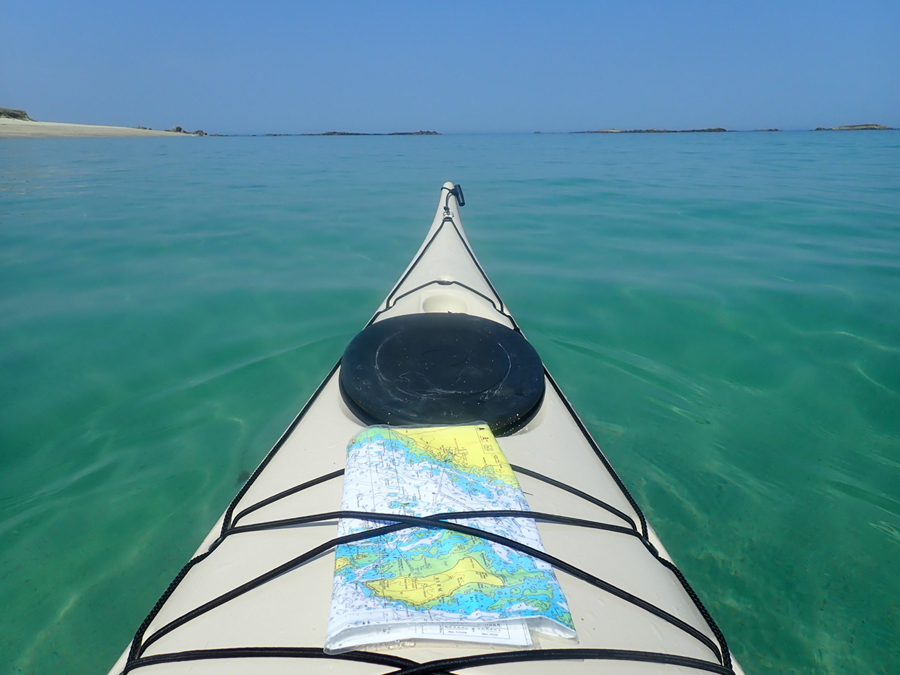 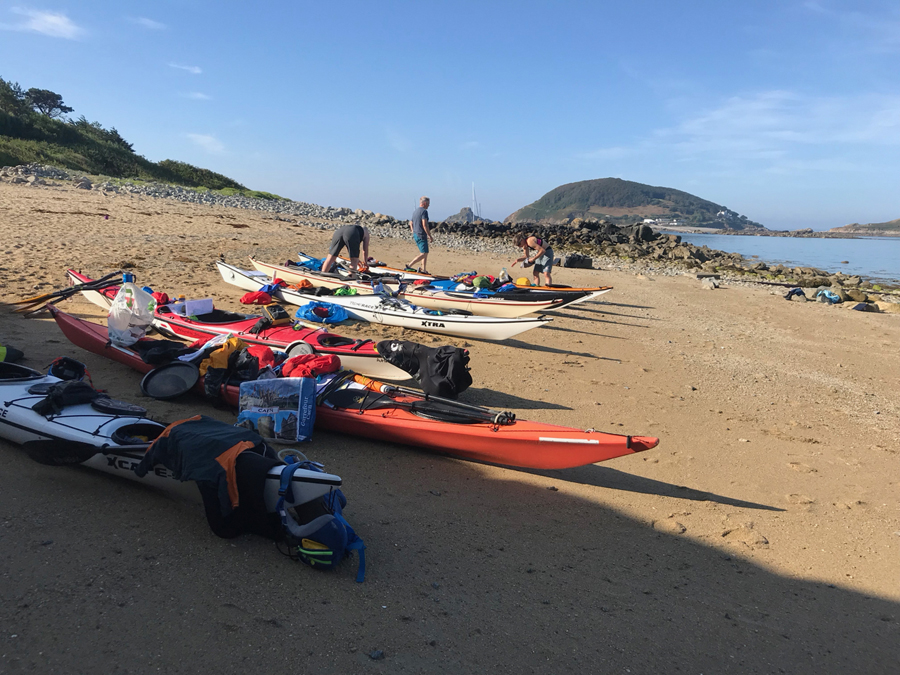 Those days spent working out vectors on a British Canoeing “Open Water Navigation and Tidal Planning Courses”, were going to pay off. If we headed straight towards Alderney we would miss it, so we had to plan for tides reaching 5 knots in strength, and we were only on neap tides! It’s one thing to be able to plan the navigation in a classroom with time and resources on your side. It’s a different situation when you are sitting in a field, with limited resources and a restaurant booking fast approaching.

Fortunately, Janet was pretty quick with the navigation and soon we were heading down the path towards the restaurant. One of the pleasures about kayaking in the Channel Islands, is the possibility of eating out in a variety of quality restaurants. This is not a wilderness area, but a populated archipelago, but with some really high-quality kayaking, which requires careful tidal planning.

The following morning, I radioed into Guernsey Coastguard, informing them that 8 sea kayakers were leaving Herm for Alderney, with an estimated time on the water of just over 5 hours. The forecast was perfect, apart from the hint of some mist patches. As we headed north through the reef at the start of the crossing the hint of mist turned into the reality of thick fog. Visibility was well below 200 metres. 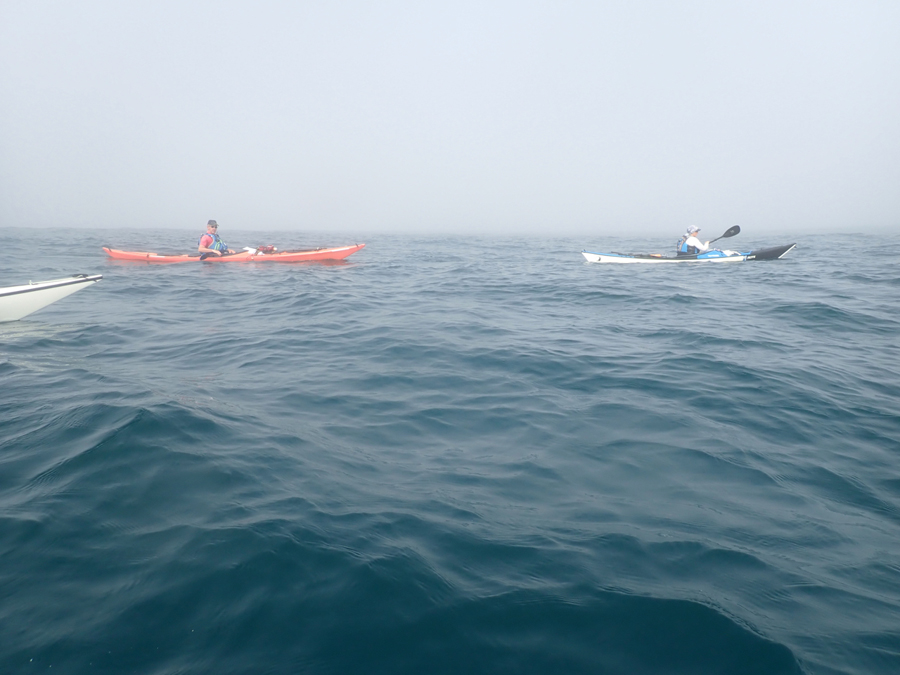 As we sat contemplating our next move the coastguard called for our position and our intentions.   It should only be a mist patch, so we decided to press on in the hope that the forecast was correct. The coastguard seemed surprised by our decision and insisted that we radio in every 30 minutes with our location, the visibility and most strangely the welfare of the group. A request that I had never had before.

As we headed into the fog we quickly settled into a rhythm, senses tuned into any unusual noises and aware of a building 2 metre swell. I radioed in after 30 minutes and then after an hour. I missed off the welfare report on the second radio call and the Coastguard was immediately back on the radio needing the information on the condition of the group. It would have been so easy to have been flippant and answer that one person had a sore shoulder, another person was feeling slightly menopausal, etc but I resisted the temptation. What was an issue though, was that out of 60 minutes potential kayaking time, 15 minutes had been spent on the radio!

The forecast mist patch evolved into an 18-mile-wide, dense fog patch, so we were within a few hundred metres of Alderney before we eventually saw the vague shape of its cliffs looming out of the fog. It was a pretty good test of the accuracy of our navigation, without doubt satisfying to those who had drawn the vectors the night before.

Alderney is the closest of the Channel Islands to both France and England, with a turbulent past. This is reflected in the numerous fortifications dotted around the coast. Possibly the darkest period in the history of the island was during the Second World War, when the island was evacuated prior to being occupied by the forces of Nazi Germany. The fortifications and anti-tank walls can be seen all around the island plus the memorials to the foreign workers who died as a result of the appalling treatment they received. 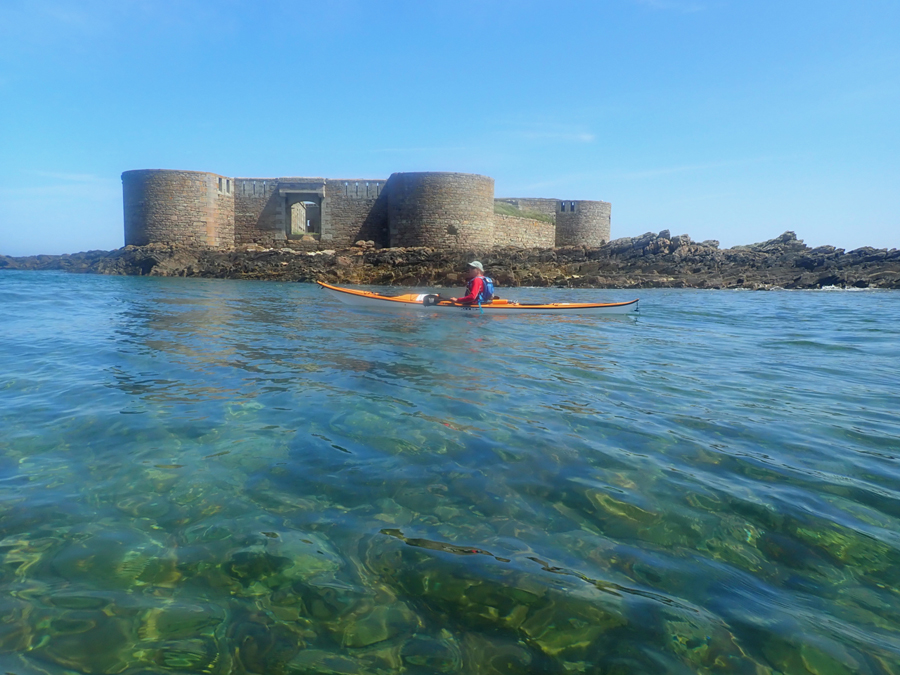 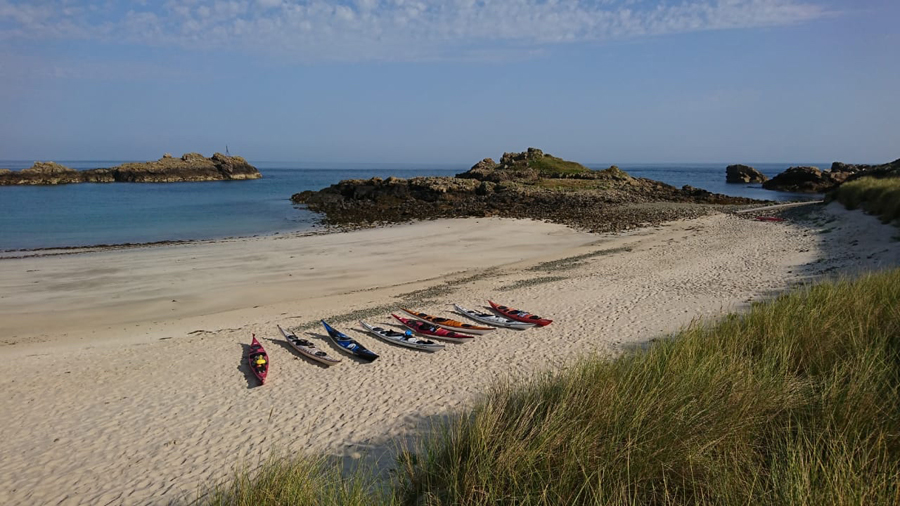 Thankfully, today Alderney is a much happier place and we enjoyed a couple of peaceful days exploring the northern isle. It was also with some relief that we watched the fog disperse prior to our paddle south back to Sark and eventually Jersey. It was a late afternoon departure from Alderney, 22 nautical miles, of which 18 were an open crossing, but we had tide and visibility on our side. 5 hours after leaving and just as the sun set on another superb day, we pulled ashore in Dixcart Bay, Sark, 60 hours after we had left.

All that remained was the crossing back home to Jersey, a further 12 nautical miles of open water and swell but we were on the final leg. A quick radio call to the Jersey Coastguard, with a much more favourable response than from their Guernsey counterparts and we were on our way. The swell did build, and the landing was tricky, but we were back in time for breakfast, a great finish to a superb week. 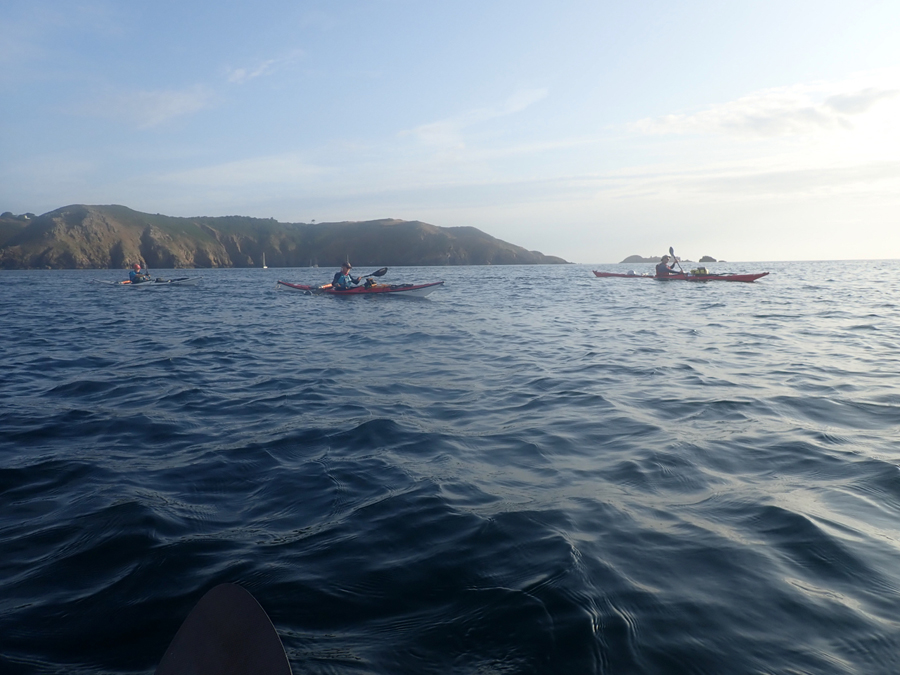 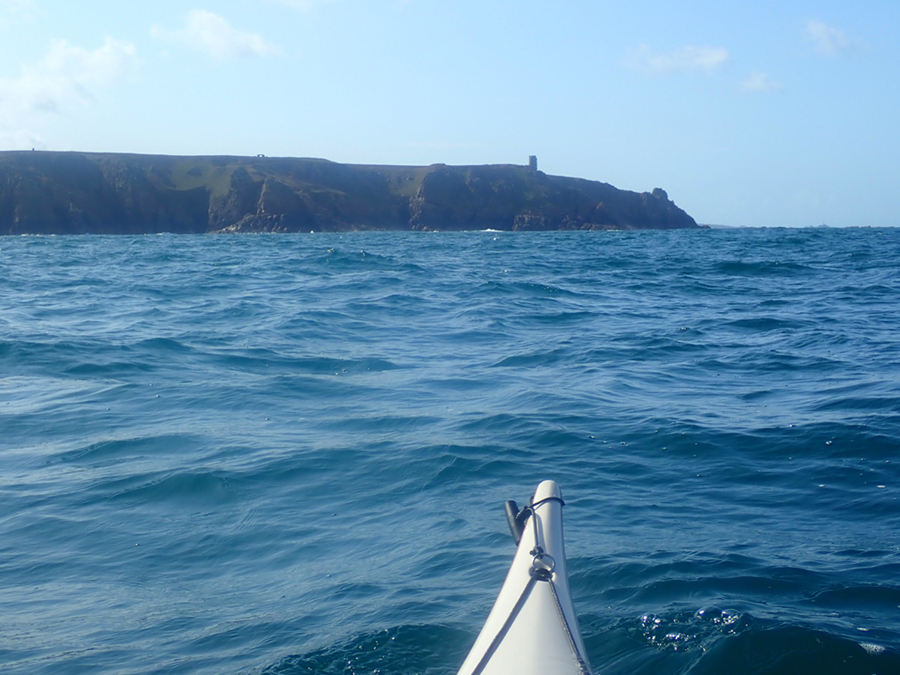 One thing most of us are pretty guilty of, me, perhaps more than most, is the desire to travel the world in search of paddling adventures. We graze on a diet of Instagram feeds, magazine articles etc, drawn to ever more remote and exotic locations. Whilst we neglect those areas close to home. We should be thinking about exploring in detail our local environment, gaining an intimate knowledge of the history, geography and wildlife of the area.

We are fortunate living in Jersey, in that distances are small, we only drove 10 miles in total, to enable this paddle to take place. 8 days of superb kayaking and for most people new places to visit, especially Alderney, which isn’t paddled to that often. 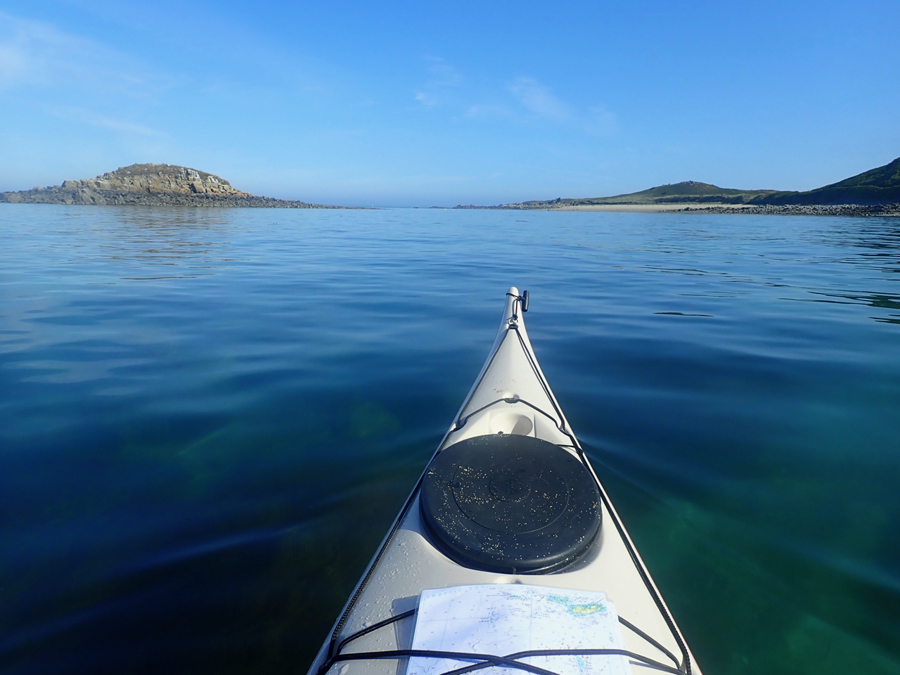 Alastair Humphreys has developed the concept of microadventures, they should be short, simple local and cheap. Opening up the world of adventure, to people who otherwise might not have access to challenges in the outdoors. Our trip at the end of July certainly met most of the criteria of a microadventure, although we could perhaps have eaten in cheaper restaurants at times.